5 Key Features with a CCTV Camera

CCTV solutions comprise of three main components, the CCTV cameras that you use, the device that you record your video onto and the cabling that connects the recording device to the cameras. Your CCTV installer will advise on the best solution for your situation but in this article we will look at 5 key features of the cameras that you might want to consider.

In an analogue camera system, the camera captures an analogue signal and this is transferred via a coax cable to the DVR (Digital Video Recorder). The DVR converts the analogue signal to a digital one, compresses it and this is stored on a hard drive within the DVR. The footage can be viewed on monitors attached to the DVR or the signal can be sent across a network to be viewed on a computer screen. The DVR can be set up to transmit over the internet and when this is done with an analogue system, all of the cameras’ signals are sent as one stream using one IP address and this makes it very efficient. 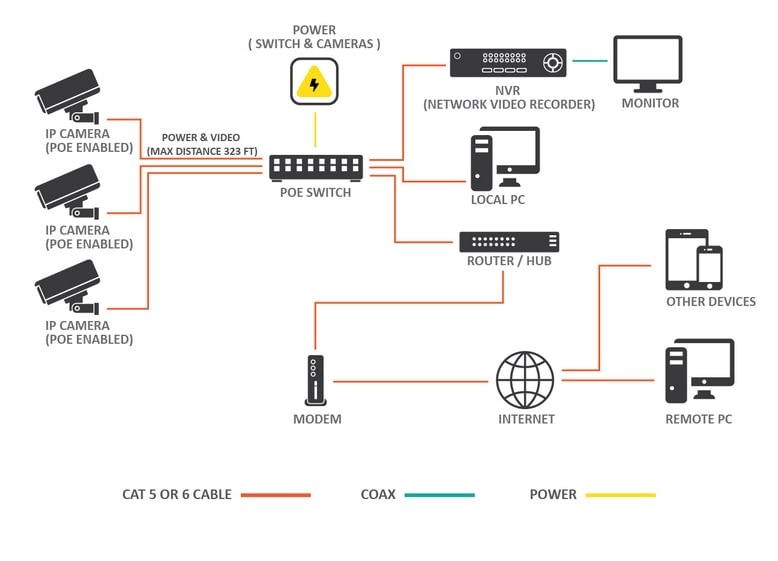 Instead of the analogue system’s DVR, for IP cameras, the video from each camera is compressed and recorded onto an NVR (Network Video Recorder). The key difference is that the signal is digital and a much higher resolution (see further down in this guide) than analogue. The NVR streams the video from all cameras and broadcasts over LAN and over the internet for remote viewing.

We’ve seen it on televisions or smartphones that the resolution is a key factor of quality of image. TV’s used to transmit in Standard Definition (SD), then about 20 years ago High Definition (HD) came along and now we have 4K Utra HD (UHD). The definition defines the pixel density or number of pixels that we see on the screen or per inch. The more pixels you have the more detailed is the image. Likewise for CCTV cameras, the higher the resolution the higher the number of pixels and the better the image quality. The only downside of a higher resolution is that  the amount of storage that is required for the same duration of video time will also increase significantly. The storage required is also determined by the Frame Rate of the Camera. If you have more frames per second then you will need more storage and your video image will be smoother. Typically the industry uses 25 frames per second. The human eye / brain can only process a certain number of rames per second up to about 40 frame sper second, so the selected 25 frames is the best balance between storage size and smoothness of the video (no jerkiness).

An obvious requirement of a CCTV camera is that it is weatherproof to withstand the British weather. But just like resolution, cameras come in different levels of ability to withstand our weather. This is normally measured by the level of Ingress Protection (IP). IP, or Ingress Protection, is a universally accepted measurement of varying degrees for dust and liquid resistance.

Can your CCTV camera see in the dark. Probably useful as most burglaries are going to happen at night. So how good your recording will be is either down to the lighting of the area by artifical means(flood lights, street lights, sensor lights or by using infra-red sensors that can see in the dark.

Infrared waves are waves of heat – also know as thermal radiation – that are emitted by all living things. So, any person or animal moving in and around your home will emit some thermal radiation. Infrared cameras (or thermal video cameras, depending on the wavelengths your model of security camera actually measures) are able to detect this thermal radiation and trace the outline of the entity that emits it.

So, this means that your home’s infrared security cameras will be able to detect the outline of anyone moving around your home, even at night. The result will be accurate thermal images, created by your infrared cameras’ high-tech image capture technology.

Video motion detection (VMD) is the ability of a CCTV system to detect movement and switch on recording. The VMD is controlled by the Digital Video Recorder.

For a business setting, VMD allows the operator monitoring the CCTV to not be continually focused on camera footage where there is no change in the image. The VMD system processor monitors  the cameras continuously. Where there is no operator, VMD is useful to save hard drive space on the DVR as it will only record footage where motion is detected. Also, all the footage that is recorded will have movement events which can be played back to monitor, saving time on monitoring.

Motion detection will compare the current image to the previous one and if many of the pixels have changed then it has detected movement.

One of the best proven ways to help reduce crime to your property is to introduce an alarm system or CCTV. Found out more from I-SPY CCTV on how we can help.